If you are a regular hopper on my blog, you must be knowing that I am doing two themes, one is A to Z international Flat Breads and the other A-Z  Recipe Challenge initiated on facebook.  In A to Z International Flat Breads I would be posting daily a flatbread starting from the letter A to Z  and for today the letter is C. In A-Z Recipe Challenge, we a group of bloggers choose key ingredients accordingly to the alphabet and post a dish every alternate month. So for this month the letter is ‘C’. So this time I decided to club one recipe for the letter C and I have chosen Corn Tortilla’s.

Corn tortilla is a type of thin, unleavened flatbread, made from powdered corn (Maize). In Guatemala and Mexico, there are three colours of maize dough for making tortillas- white , yellow and blue (or black). (Yes Even I was surprised when I read the blue Maize). Blue corn is a variety of flint corn grown in Mexico and Southwestern United States. Corn Tortilla is similar to Arepa’s (Though Arepa’s are much thicker than tortilla’s.) Corn Tortilla is a staple food in North American and Mesoamerican cultures since pre-Colombian times. (Source Internet).

Fresh Corn Tortilla’s can be enjoyed as taco’s with desired filling and also are the basis of many traditional Mexican dishes such as Enchiladas, Quesadillas etc. They can be served as an accompaniment to soups, stews and grilled meats . Corn Tortilla can also be deep fried to make crisp tortilla chips, which can be accompanied with salsas and dips such as guacamole.

So coming to what I cooked, I used corn flour to make this tortilla’s. I put my roti maker to good use, which is hardly used except for thalipeeth or making puris for Pani Puri. I made the dough quite soft and pressed in between the Roti maker using 2 Zip locks. Then I carefully turned them over to a pre heated pan. You would be tempted to make the tortilla as thin as possible, but it would then be bit difficult to turn them over. Also I think while cooking the Tortillas puff’s up , as it looked thicker than what I rolled. We enjoyed them the next day as a pizza base. I baked the corn tortilla’s again in oven topping it with pizza sauce and cheese.

Both my kids were delighted. My son loved it and said he always wants this pizza. He also said it tastes similar to nacho’s due to the crispy base. My 2 year old was like Mumma I love pizza. Mumma happy 🙂

So here goes the recipe: 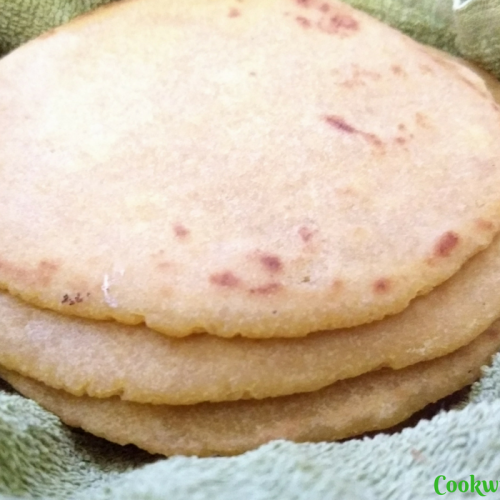 Congratulations on your milestone Renu ! The corn tortillas have turned out perfectly. What a great idea to use them as pizza base !

Wow! Now this is so like our Makki di Roti. I would love to make my own tortillas and now I have your recipe.

First of all, congratulations Renu! Many more yet to come!! Guilt free flat bread. We can substitute this for pizza bread also. Homemade is always best. Great share!