Rasgulla or Rasagolas are soft spongy sweet balls made using fresh chenna or paneer. The chenna is mashed to make smooth balls and then are boiled in sugar syrup until they light and fluffy. Soaked in the same syrup for some time, and one gets the best soft spongy Bengali Rasgulla.

Bengali Rasgullas are one of the most common sweet from the East of India. There are many chenna or paneer based dishes from this part of India. I and my family love this rasgullas as they are easy to make and the best part is that they are not fried. One can even squeeze out some of the sugar syrup to make eat it with less guilt.

Fresh Chenna or Paneer, the difference

The process of making a chenna or paneer is the same. That is the milk is boiled, then curdled using an acidic ingredient. I have already detailed the recipe on how to make fresh paneer at home, with step by step instructions. So Chenna has slightly more water content and is generally in crumbled form.

Paneer is a shape given to chenna. That is it is made into blocks so that it could be used in different paneer dishes be it savory or sweet. A very versatile ingredient and can be used in the main course as in this Methi Matar Paneer, Santa Thongba (Manipuri Curry), or in this Palak Paneer. Delicious starters can be made using paneer as in this, Barbeque recipe Paneer Tikka or this Nutty Spinach, paneer and potato balls.

It is best to use cow’s milk instead of buffalo milk for making chenna for rasgulla. For people staying outside India use milk which has reduced fat. I use the full-fat milk available here, but then that is like 3-4 % fat, so ideally it is reduced fat.

Making of this Bengali Rasgullas is not tricky at all. If a few things are taken care of. Every recipe has some tips and tricks and if one follows them properly you will attain the best every time.

People get worried that in a pressure cooker it might spread or break. But as said if method is followed properly, making rasgulla in a cooker is a fail-proof recipe.  I have been making it in the cooker for more than 7-8 years now and it always works for me.

Rasgulla in an open pot

Many prefer making rasgulla in open pot instead of a cooker. The process is almost similar to that of cooker, except that the lid is not closed here completely. The soft chenna balls are added in hot boiling water and boiled for 20 minutes until soft. It is then allowed to cool so that the syrup is well absorbed by rasgulla.

So what makes spongy Rasgulla?

What makes the rasgulla hard?

The next trick is not adding too much sugar in the water used for boiling. If one adds to much water the rasgullas will not be spongy and might turn a bit hard. So I just add about ¼ or less of the total sugar needed. Once they are cooked, I remove it add the remaining sugar and then mix everything. Check the recipe for detailed steps.

I also like to add cardamom seed in between each of the balls. This creates a cavity and makes the rasgullas soft. It also adds a nice flavour the rasgulla.

If you add too little water while making the rasgulla, they will be flat. Also, they need space to expand. If you overcrowd your pot they will not be able to expand and hence flatten. So keep that in mind while making rasgulla.

There are many ways to flavour the rasgulla. I like it plain or with some saffron. So while making the rasgulla I add a pinch of saffron to the sugar syrup. The saffron will also add a nice yellow tinge to the rasgulla. However, if you want plain white, do not add the saffron.

I love to enjoy this rasgulla chilled. Rasgullas are best enjoyed when they are cold and not hot. 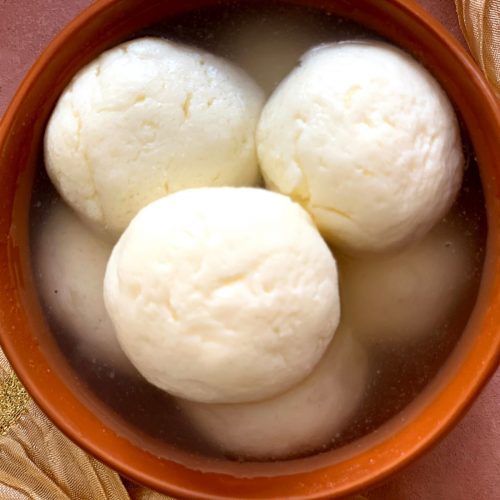 To make Paneer and Rasgulla

I have added this post in July 2014, today I and updating the content, and added new pics. (Process shot video’s coming soon) and sharing with Foodies_RedoingOldPost

Love to read your comments and feedback. If you have any questions please ask in the comment section. I will try to answer as soon as I can.

If you tried this recipe, please comment below and do not forget to rate the Recipe.

Also, would love to see your creations, take a picture and do tag me at @cookwithrenu using the hashtag #Cookwithrenu on Facebook, Twitter and @Renunad on Instagram.

Do you also have chum chum recipe ?

Hi, not yet. Thank You

Spongy, juicy and soft delights...love rasgullas and ras malai. Learnt how to make them from my MIL. however, the recipe has not found its way to my blog as yet as nowadays I really don't make them at home as the ISKCON temple sells them and they are just perfect. I've not made them in a pressure cooker but I think I should try.

Its 4:53 in the evening here, and with the rains outside I am craving for these rasgullas , Renu ! so perfectly made and thanks for the tips too !

Getting perfect spongy texture of rasgullas at home is a bit tricky. Your detailed post makes it look worth trying.

Perfectly made rasgullas and home made is the best. Nice detailed post.