No Onion No Garlic Pav Bhaji is a Variant of the delicious Pav Bhaji, a Street Food from Mumbai. It is finger-licking yummy and a party favourite recipe and you will not even realize that it is made without onion and garlic.

Why No Onion No Garlic?

Does No onion No Garlic Pav Bhaji Taste Good?

There is another famous Pav Bhaji called Jain Pav Bhaji. Now for those who do not know, Jains follow a diet in which they are restricted to certain food items. Like they do not eat anything grown below the ground. So Potato is a strict no. So a Jain Pav bhaji does not have Potato in it.

Generally, potato is simply skipped in the Jain Pav Bhaji sold on the street. At home, however, you can make it by replacing potato with raw banana. At times even Bottle gourd/Dudhi/Lauki is added.

Another famous variant of Pav Bhaji. Loads of cheese are being topped on the Pav Bhaji. I have never attempted this, like in some recipes, I do not like to change. Especially when it comes to changing its taste. But yes there are hardcore cheese Pav Bhaji Lovers.

There are many more versions of Pav Bhaji. I am not going through more, but you can explore it more.

Can Street Food be healthy?

Street food is synonymous with junk many times. But for me, this Pav Bhaji is one healthy food. Of course, if you are in control of the butter quantity. I know when cooked on the street, it is cooked on the same tava for the whole day and with loads of butter, it loses all its healthy goodness.

But when you make it at home, you are in control of everything. Cooking time, veggies, fat content etc etc. As It is loaded with vegetables, for me this is one healthy meal one can have.

I remember once I was explaining this meal to my Irish Colleagues and they told me this is baby food. Because I told them it has mashed vegetables cooked along with spices. Yes, why not, if you skip the spices, butter and salt, it would be a healthy food for babies less than a year old. And with some butter, salt and spices (if you give it) it can be enjoyed by a toddler as well. For babies, I mean only the bhaji and for toddlers if they eat bread or pav.

Pav Bhaji is also a very common dish for parties. It is a favourite of all from kids to elders and the ease of making it. Also the bhaji taste good the next day and I always make more to eat the next day. So it is a good

Vegetables one can add in Pav Bhaji

Generally, Capsciusm, tomato, green peas and cauliflower are used. But one can add more or less vegetables to your liking. Few add carrots to this. I like the addition of half beetroot at times. It imparts a lovely colour and texture to the bhaji.

If I have spinach I add a handful. It adds to taste and texture. At times a small part of cauliflower is replaced with Broccoli. So, in short, I love to experiment with my Pav bhaji and most of the time apart from the veggies mentioned above there would be one more vegetable added.

Few even add eggplant to the bhaji. I have not added it yet. But I have experimented with a lot of different vegetables. One of my uncles, i.e. my close chacha, does not eat pav bhaji as he believes every bhaji has eggplant in it :-). Probably I remember him every time I make Pav Bhaji and have never dared to add some.

How is Pav Bhaji Served?

Pav Bhaji as the name is 2 things served. I.e. Pav and Bhaji. Pav is a type of eggless dinner rolls very common in Maharashtra. The pav is shallow fried/lightly roasted using butter on a hot Tawa/griddle. This is then served along with the bhaji, lemon and onion(if you eat).

At times a little pav bhaji masala is sprinkled on the butter and then the pav is shallow fried/lightly roasted along with the masala and butter to make it masala pav.

I do make my Pav at home and the pic is completely homemade. I.e. the pav and the bhaji both. I make pav using all-purpose flour/maida/plain flour. Off late I have been mixing maida with whole wheat flour and getting good results. Check out the recipe here. I have even made a 100 per cent whole wheat flour pav. The texture of it is a bit rough as compared to maida/plain flour.

I have enjoyed the 100 per cent whole pav with this Chanya Tonak (Goan Dry peas Curry). Pav can be eaten as a breakfast bread with some tea or as a snack with Vada Pav or as a breakfast or meal with Misal Pav.

I boil or steam the cauliflower, potato and green peas. Capsicum is blended directly instead of steaming. I do not like the taste of steamed capsicum and this is the way I have learned from my mom. I make a puree of tomato and capsicum and saute it in butter.

The boiled and mashed vegetables are added. It is then allowed to simmer along with some butter, spices, red chilly powder and pav bhaji masala. This Bhaji is served along with pav with a dash of butter.

I like to add less potato and more cauliflower in my bhaji. But feel free to add more. The quantity of ingredient is just a guide. One can add more or less as per preference. 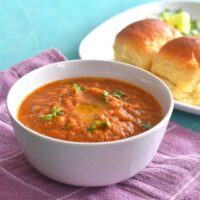 No Onion No Garlic Pav Bhaji

The recipe first appeared on Cook with Renu on 23rd November 2014. Today 20th May 2021, I have updated the pics, content and added a Recipe card.

Video would be shortly uploaded.

While we love onion and garlic flavor in our pav bhaji, there are days ( especially during festivals) we prefer onion garlic free meals.Woyld definitely try your version during such times.

Loving the look and texture of this satvik Pav bhaji, Renu... my elder one loves pav bhaji and wants it everyday :-)

When my in laws were with me, I always had to make pav bhaji without onion and garlic. Must say it does taste different but it is still so delicious. Love pav bhaji, it is my all time favorite.

Thank you...you can submit your email id in the text box, on the top of the page. It will deliver the recipe right in your mailbox, whenever a new is published.

I came across your blog while looking for some Indian food recipes and liked a lot. How amazing! I will keep an eye out for all your recipes :)